Americans Are Still Not Voting 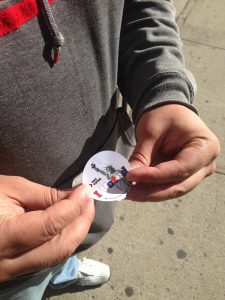 Young man putting on an “I Voted” sticker after having placed his vote.

Over the past few months, multimedia has been swamped with celebrities’ posts encouraging Americans to vote for the presidential election. On Election Day Donald Trump, Hillary Clinton and President Barack Obama were even featured in an Election Day Snap Story, ensuring young Americans that every vote counts.

But although this year a higher number of voters was expected than the past two elections, (which was ranked “worst of any long-established democracy, especially on campaign finance and electoral registration,” The Harvard-based Electoral Integrity Project confirms), only an estimated 131,741,500 Americans voted for a 231,556,622 population of eligible voters according to the United States Election Project.

In fact, there were many Americans did not register at all. It seems the registration process itself, an almost uniquely American phenomenon, is one of the forces behind the high number of non-voters. “The burden has always been on the voter to find out how to register and get themselves registered,” David Becker, executive director of the Center for the Election Innovation and Research, tells the BBC.

Haley Dresser has a particularly burdensome situation. Like many recent students and recent graduates who have relocated for school or career, Dresser, 21, had to register for an absentee ballot. Originally from Seattle, Dresser now lives in New York. Washington State is one of the three states (including Oregon and Colorado) that only conduct voting by mail. By the time Dresser found out about this, it was too late for her to send in her ballot. This would have been Dresser’s first time voting.

“It’s like one of those things: you never learn how to pay your taxes before you actually pay them,” Dresser says, “It’s one of the most obvious things you have to learn in life, but no one actually teaches you.”

Although the voting process isn’t a part of her curriculum, Dr. Rebecca Callahan, Associate Professor at the College of Education, University of Texas, believes that including political discussions in the education system is an effective way to get young people to vote. Callahan herself makes sure to teach first-generation college-goers about the importance of their voices. “We discuss how important it is to sustain a democracy of the people, and how our research has pointed to the considerable potential of young people to enact social change,” Callahan says.

However, Callahan realizes that not all young people have the same access to social-political education, especially before college. “Low SES, high poverty schools are more likely than more affluent schools to drop social studies instruction (as well as art, PE, music) and focus on ‘the basics’, reading and math drills in an attempt to improve test scores,” she says. As social studies are not a priority in many high schools, Callahan suggests that this could be correlated to abstention. “I am concerned that while some groups are becoming more engaged, others – the less educated- are becoming more apathetic and passive.”

But socio-political education doesn’t guarantee active voting. Alex Portelli, 24, went to a public school in the suburbs of New York that held debate classes on the candidates during the 2008 election and encouraged students to vote. Unlike Dresser, Portelli learned about the voting system as a part of the curriculum too. During her undergraduate degree, student groups encouraged fellow students to vote. “They made it convenient to register to vote and encouraged us to get an absentee ballot if we were registered in a different state,” she said.

Being registered in a reliably blue state of New York, Portelli did not see the importance of her vote. “I think I would have more of an inclination to become more educated on the candidates if I were voting in a swing state,” she said. Revealingly, the eleven swing states of the U.S. have an average of 65% of voters compared to the national average of 56.9%, based on the numbers of The United States Election Project.

Just like Portelli, B (who after the election wanted to remain anonymous) did not vote this year, seeing as his home state of Illinois would be blue either way. However, B feels less indifferent about his vote now that the results are in. “After seeing my friends posting on Facebook about voting I felt bad about it and should have voted,” B says. “Even if Illinois is going to be democratic, if everyone thought like that nothing would get done!”

Dresser plans to get a New York driver’s license so that she can vote in New York for the next election.