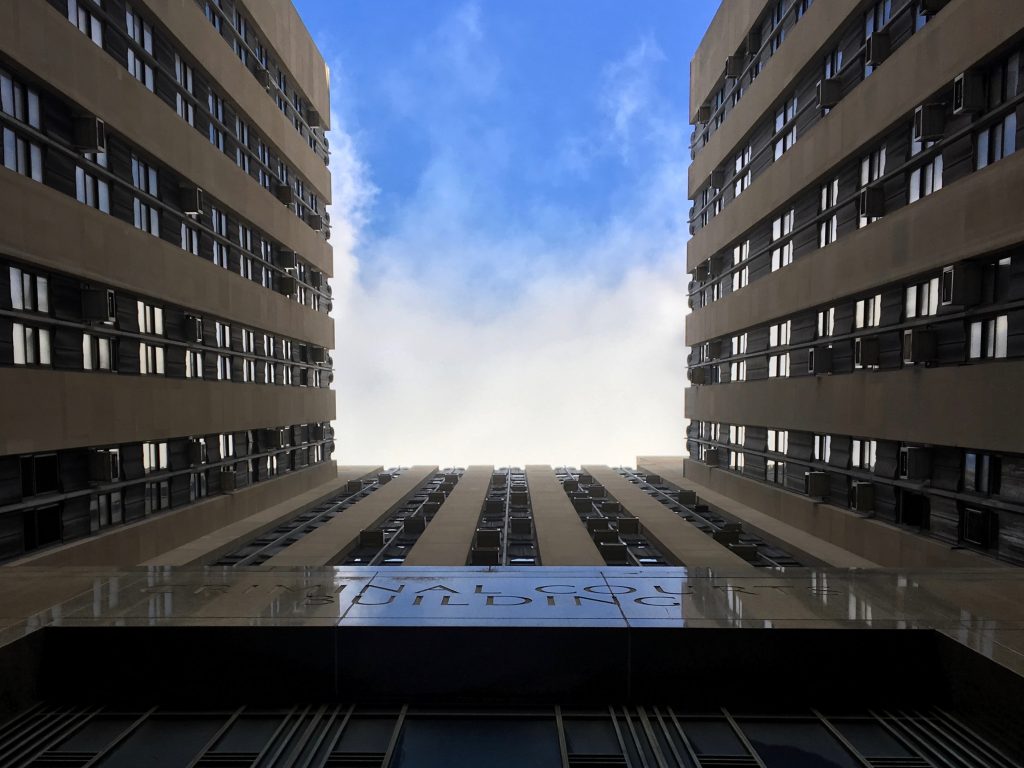 The Manhattan building of the New York Criminal Court is the place where many tourists come to see the U.S. legal system in action

When Christiane Rolef planned a family trip to New York in her native Germany, she was on the lookout for unusual touristic experiences. Exploring Brooklyn. A day of cycling in Central Park. A trip to night court.

“I’ve read online that you can hear and watch how defendants meet the judge for the first time. In Germany, it is a closed procedure,” she whispered in the courtroom on Tuesday evening. “Look at my son’s face; he can’t believe it! It’s like on TV.”

Indeed, her 16-year-old son, sitting next to his father, was glancing around enthusiastically, trying to catch details of the cases – despite the hall’s imperfect acoustics and the constant chatter.

What was unraveling in front of them at the time could hardly be called exciting compared to crime dramas on TV. Earlier that day there was a big case in the same room at the Criminal Court in Manhattan, with the woman who earlier this year accused Eliot Spitzer, the former New York governor, of assault, appearing in court to be arraigned on extortion charges. But by evening, the court was mostly processing routine cases of trespassing, traffic violations and one man taking a ride on the subway without a ticket.

Still, Rolef’s family was not the only tourists who chose to spend their Tuesday evening this way. Around 8 p.m., a solid stream of overwhelmingly blond teenagers went through the doors. They turned out to be 13 Danish college juniors, accompanied by two teachers.

“Years ago, when I was a kid, there was only one night court – this one. People would bring their dates here,” he said. “It was an inexpensive date.”

But as visitors on Tuesday evening came in and left, there were people who have spent many hours in the same room, waiting for their family members to finally appear in front of a judge. They were mostly people of color, while the majority of the curious observers were white.

“There were people in shackles here. To me, this is not entertainment,” says Lillian Anglada, an NGO worker helping HIV-positive New Yorkers, who was waiting for her son to be arraigned.

Helping Anglada with minor legal matters, such as ensuring property release, was William Gonzalez, who himself spent 30 years in prison and managed to get a certificate of a paralegal.

His view of the courtroom was very different from that of the tourists driven by curiosity.

“Whenever I look at the yellowish door on the left where they keep everybody, I feel dread. It is like a déjà vu, like looking back into that world,” he said, referring to the door in the courtroom that leads to the holding cells for those awaiting their moment in court.

Anglada’s son was arrested around 11 p.m. last night. As the court went on the recess 23 hours later, his case still wasn’t processed.

The slow pace of the whole system, although the arraignment itself usually takes only a few minutes, did not escape the observers in the room.

“I can’t understand why does it take so long to speak to a lawyer, or why do they sit here for so long after the fact, waiting for their paperwork,” said Kayla Finley, a New Yorker who came to see the court proceedings with her mother. “Probably, if they could hire their own lawyer, it would be faster for them,” she added.

The issue of how people with low income are at a disadvantage in court has been widely discussed in recent years, especially regarding the amount of bail.

In New York, 68% of defendants wait for trial at home without supervision or money bail, which makes the city a national leader in that regard, Elizabeth Glazer, the director of the New York City Mayor’s Office of Criminal Justice, wrote in her commentary for the Marshall Project last year. And yet, the amount of bail is “often mismatched to defendants’ financial situation and the risk they pose,” she noted.

Theo Jones, 32 and father of three, was accused of a domestic violence incident that he described as a “bad messaging” with his ex-girlfriend. On Tuesday night, the judge ruled to release him but banned him from contacting the complainant in any way.

For Jones and his girlfriend, who came into court five hours before he was released, this was a dramatic experience. Yet, they don’t feel offended that there were people in the room who came to watch exactly this kind of drama.

“Some people who come to court are just learning. If they want to become legal aides or lawyers, this can help them,” he pointed out.

That was the case with the Danish students for whom a visit to court was a part of a school trip. Many of them will later go to law school, and they can benefit from seeing the legal system of a different country through their own eyes, said their teacher Anders Pedersen.

In an American court, the Danish group was surprised by the noise and how police officers chat with each other in the courtroom. “It seems that, for them, it’s just a day in the office,” one of the teachers, Mads Maagaard said. “I had an expectation I would be able to hear what was being said,” Jakob Cardi, 19-year-old student added, admitting that he was a little disappointed.

Others were surprised by the procedure itself. Three minutes is not enough to decide whether someone should be in jail, says Rolef, who works with some legal matters as part of her job at a bank in Germany.

Legal Aide attorneys working on Tuesday night admitted that they were unaware of the popularity of the night court among tourists.

“We are on TripAvisor? That’s very sad, ” said Melissa McGrane from the Legal Aide Society.