Charter schools cause dissent in Greenpoint and Williamsburg 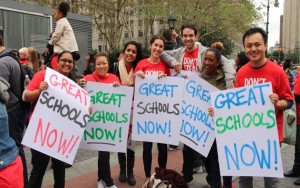 Karen Sprowal got her son into a charter school because her district’s public schools were struggling. Her son, who has ADHD, was quickly singled out.  Within twelve days of him attending a Success Academy school, the administration realized he would probably require special needs help. They  isolated her son and three other children with special needs. They felt that these children would affect their test scores. “They had it in their mind from the first day that this was a kid who was going to require special teaching and interfere with their success rate, and they needed to eliminate him,” Sprowal said.

Sprowal’s charges are just one of the concerns that parents in District 14 have waged as another charter school is set to open in the district. District 14, which encompasses both Williamsburg and Greenpoint in Brooklyn, has public schools with fairly high test scores. The Department of Education has recently authorized a fourth charter school, another Success Academy, to be placed in the area. Many parents are concerned about the decision. And Sprowal believes they have a right to be concerned; her son’s charter school refused to make allowances for his special needs, and told her that she needed to send him to a local school.

Success Academy refused to comment on the record after several phone calls and emails. They have reportedly denied such charges that they counsel children out of their schools.

The impact on District 14, in particular, will likely be exacerbated by increasing gentrification.  In Williamsburg, the population of children under 5 rose by 10.8 percent between 2000 and 2010.  Fifty-six percent of households in Greenpoint were constituted by families. Tesa Wilson, a parent in the district, is the president of District 14 community education council. Wilson says that because District 14 is an under-enrolled district, their schools have room for charter placement. But because the area is undergoing rapid gentrification, it is likely that there will be many more children than room in the schools if charter schools continue to be co-located into the public schools. Wilson does not believe that the Department of Education has a “five year plan” for the district. She feels that their lack of forethought will put strain on District 14 public schools, which will disadvantage their students. “Here in District 14 we have been fighting charter colocations for some time. It’s a negative, when it comes to parents. This is one of the issues I regularly bring up with the Department of [Education]”, says Wilson.  Wilson also notes that “Oftentimes we’re making room for children across the district, or across the city. And when the children that are neighborhood residents are ready to attend schools, they’ll be automatically be forced into overcrowded schools”.

Charter schools were originally meant to alleviate demands on overwhelmed public schools. According to the Department of Education, three out of four charter school students come from low income families. However, because enrollment in charters is through a lottery, they often have smaller numbers of special education or ELL students, which critics say calls into question the validity of their higher test scores.

The colocating of the charter and traditional public schools is also causing friction among neighborhood parents. “When kids see a different school within theirs, with new paint and equipment and books, and their school is falling apart with old books and equipment, it’s really discouraging, especially if their parents applied to the lottery, and now they’re back at their old school,” said Meryle Weinstein, a research professor at NYU.

And, as Sprowal points out, the effect of charter schools on her own son was “devastating”.  She added: “It set the tone for what he thinks about education, about learning”.