Green is The New Black 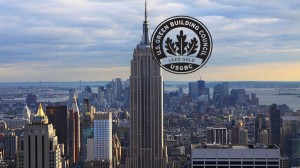 New York is an epicenter for environmentally friendly construction

Everywhere you look things are going “green,” from farmer’s markets to grocery stores, taxis to hotels, the eco-trend is in full force. Local, state, and federal governments are now getting more involved as this “green” movement gains traction. With no end in sight for our fossil fuel dependence, the government is helping cities decrease their carbon footprint. Currently, 45 states either require or reward environmentally certified buildings. In New York City, a city full of skyscrapers, not all are created equal. Some of these towering structures are built following a specific set of guidelines that make them environmentally friendly, or “green.” These buildings have increasingly been sprouting up across New York and the nation.

“Buildings have been green for a while, maybe 10 years,” said Richard Galehouse, a member of Sasaki Associates architecture firm, “but there has been a definite push nationwide in the last 5 years.”

In 1994 the first environmental construction standard under the Leadership in Energy and Environmental Design (LEED) ranking system was introduced by the United States Green Building Council (USGBC). Since then the system has developed into a comprehensive method of classifying just how eco-friendly a building is. The building is given a certain number of points based on specific prerequisites of eight credit categories. Included in the categories are things like water efficiency, sustainability, and waste reduction. Depending on the number of points the buildings are given one of four LEED certifications; certified, silver, gold, or platinum which is the highest level. According to the U.S. Green Building Council there are almost 75,000 LEED certified projects nationwide with almost 850 of those projects being in New York City, making it one of the leading cities in green buildings.

In 2008 the Green Codes Task Force (GCTF) was introduced in NYC to make building codes more environmentally friendly. Since then, almost half of the 111 proposals have been accepted and put into place that have helped increase sustainability and reduce carbon emissions.

“The initial cost of the building is higher because you use better materials and more advanced mechanical systems,” said Everton Harris of the NYC Department of Buildings, “but these systems and materials lower operational cost, so it tends to even out.” Proponents argue that thanks to LEED certification, buildings are higher quality and will last longer than those built without some form of certification. For this reason LEED buildings are an attractive option for institutions and any long standing building.

The biggest attraction of LEED buildings is, of course, the reduction of carbon emissions. Largely in thanks to the GCTF, New York has committed to reduce emissions by 30 percent in the next 10 years. The Urban Green Council thinks more can still be done.

A report published on the Urban Green Council website outlines a detailed plan to drastically overhaul the city’s infrastructure to cut almost all greenhouse gasses. According to the authors of the report, “modelling indicates that by 2050 New York City could reduce its greenhouse gas emissions more than 90 percent from 2010 levels.” The report goes on to explain that almost all suggested technologies required are not only available but practical.

Although New York may be a leader in LEED construction most of the nation seems to be following suit. “Most firms have at least one or two guys who are certified these days,” said Ron Stevenot who owns a small survey company in Central Florida. “It’s a good handle to have, they’re continuing to develop it.” Getting LEED certification is a complicated process, he explained, which is pushing some firms to now employ an individual who is LEED certified on staff so the process becomes easier. Stevenot predicts this trend will become more common in coming years as local and state governments increasingly require certain levels of LEED certified certified buildings.

“State funded buildings in South Carolina have to be at least LEED silver,” said Mr. Galehouse. In addition to the 45 states that require LEED certification, 14 federal agencies or departments require some form of LEED certification for their buildings. In many cases, these states and agencies are also requiring that older buildings be restructured to include green codes and LEED standards.

“It’s a complicated process,” Mr. Galehouse said, “but it’s a vital one, and one we need to continue to grow.”