When Xu Shong Wei opened his massage service shop in 2008 in Sunset Park, Brooklyn, he was one of the first three pioneers of the business on the Eighth Avenue. Now, six years later, there are over 10 shops just on the Eighth Avenue strip in Chinatown.

In order to survive the increasing business competition, Wei’s massage shop, Tai Shuang Spring Resort, has taken the initiatives to offer other services such as haircuts and sauna treatments for free.

Because of this wide-range of services offered, Wei has been forced to increase his workers’ salary as he could not afford to employ more workers. According to Wei, he has increased his workers’ pay up to 80 percent since 2008.

According to Renee Giordano, Executive Director of Sunset Park Business Improvement District (BID), Sunset Park has not been severely affected by the rising cost and the economic decline of the past few years. However, the economic downturn has finally hit the neighborhood in 2013, causing several long-time businesses to close or relocate due to the rising costs. Many of these businesses are forced to close down or move mainly because of competition, said Giordano. 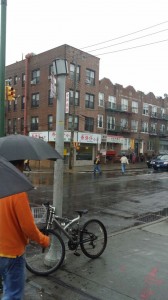 “I think some businesses are moving out because some of the entrepreneurs weren’t really prepared to run a business. However, as soon as a place is vacant, there is a new business ready to come in, so Sunset Park is still a hot area,” said Giordano.

However, Wei, who moved to United States from China 20 years ago, thinks that the economic decline has not seriously impacted the Chinese community.

“Chinese business owners will always try to lower their costs to cope with the economic downturn,” said Wei, who was interviewed in Chinese. According to Wei, because most Chinese business owners have access to cheaper goods and equipment from China, most of them manage to keep a low cost in running their businesses.

As tipping is not a part of Chinese community’s culture, Wei said having a restaurant business in a neighborhood with primarily Chinese customers also means no extra income from tipping.

“The owner even has to work as a waiter to reduce the cost,” said Wei.

Besides the increasing business competition, the rising cost of living as well as the increase in rent cost around Sunset Park area have also posed a serious challenge to small business owners like him.

In 2008, Wei signed a 10-year-lease with his landlord, where he needs to pay his monthly rent with three percent rent increment every year. According to Wei, his rent has increased from $1300 per month last year to $1700 per month this year.

Based on Sunset Park (BID)’s 2013 Fiscal Year Annual Report, the success of the area over the last 18 years has caused rents to sky-rocket.

According to Renee Giordano, Executive Director of Sunset Park BID, rent increases are caused by several factors. However, she believes that the change in building ownership has become one of the main contributing factors.

“I believe that some of the rent increases are due to the change in ownership, with new landlords purchasing the buildings at high prices with high mortgages,” said Giordano.

Giordano also stated that the rent goes higher as the number of the avenues goes up. On the other hand, along the Fifth Avenue, which is the main commercial strip in Sunset Park, rents are higher in between the 50th Street and the 60th Street. Meanwhile, rents tend to go lower as one moves out toward each end of the Fifth Avenue.

While some businesses manage to move around Sunset Park to maintain a low cost, many do not have the same chance.

“A few moved from a high rent section to a lower rent street, but in general, the businesses aren’t really moving but are actually going out of business,” said Giordano.

For now, Wei just hopes to carry on and continue to offer good services through his massage shop, although he still thinks that the future is quite unpredictable.

“There were only three massage shops on the Eighth Avenue before, but now there are over 10 shops,” he said. “So I am not too optimistic on where will I be at in the future.”