Bushwick Provides a Space For Artists to Talk and Learn

New York – The People’s Climate March this past Sunday will not only be remembered as the largest climate march in history, attracting more than 400,000 people to raise awareness about global warming, it also marked the start of an artist movement.

Two hundred and fifty artists from across the country set up shop at Mayday Space in Bushwick to work on 40 large-scale art projects for the march itself and many plan to stay into October to continue this artistic collaboration, share ideas and talk about art.

Large banners, flags and pop-ups filled up the Mayday Space with palettes, brushes and pigments as artists hope to achieve ecological justice and a feasible living environment. The floats ranged from a large trailer painted with images of the atrocities of environmental pollution to a 25-foot-long giant inflatable missile symbolizing the major concerns with the US military. There was even a colossal parachute decorated with propaganda for ecological protection intended to represent safety for the US citizens. The artist community at Mayday Space not only gathered to create the installations for the climate march but also to advocate change. 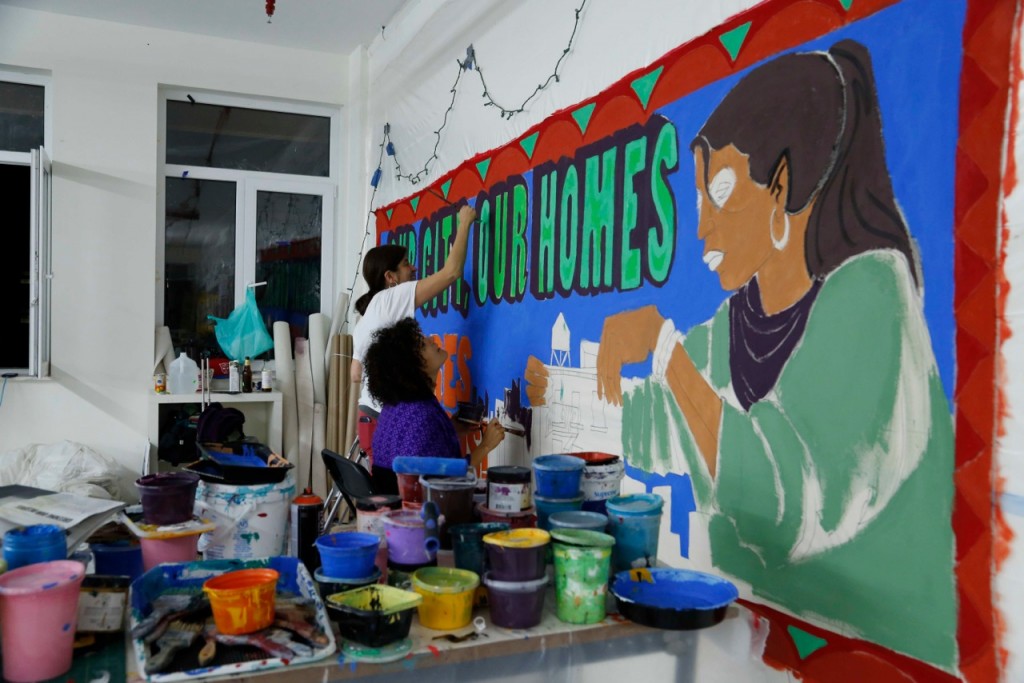 Two artists work together on a large painting in Mayday Space. Photography by Wen Xin.

“It is a good opportunity for artists not just to make beautiful art pieces, but also to expand the narrative of art globally and locally,” said Rachel Schragrs, who manages artists and their productions for People’s Climate March.

Artists from all over the country see the art assemble as a great chance for everyone to talk and learn. Remy Fredenberg, a 28-year-old graphical designer from Arizona, came to New York last month to visit, but decided to stay. “The art space gives me the opportunity to see how giants deconstruct their artwork, so in the future I can replicate and take it back. It provides a great chance for me to learn something new with those giants.”

At the same time, these artists put a lot of effort to work on their pieces to gain more experience. “Artists here in the Mayday Space matter more than the art itself,” said Crystal Clarity, art organizer for Mayday space. In the week before the march Clarity worked over twelve hours a day each day to produce two large ecological parachutes, three mural paintings and some small promotion banners. She thought by using different kinds of mediums she could represent various voices of the country. “The reality of climate change can be shown in the art pieces, in the same time the ideas of creating art pieces could connect artists together.” 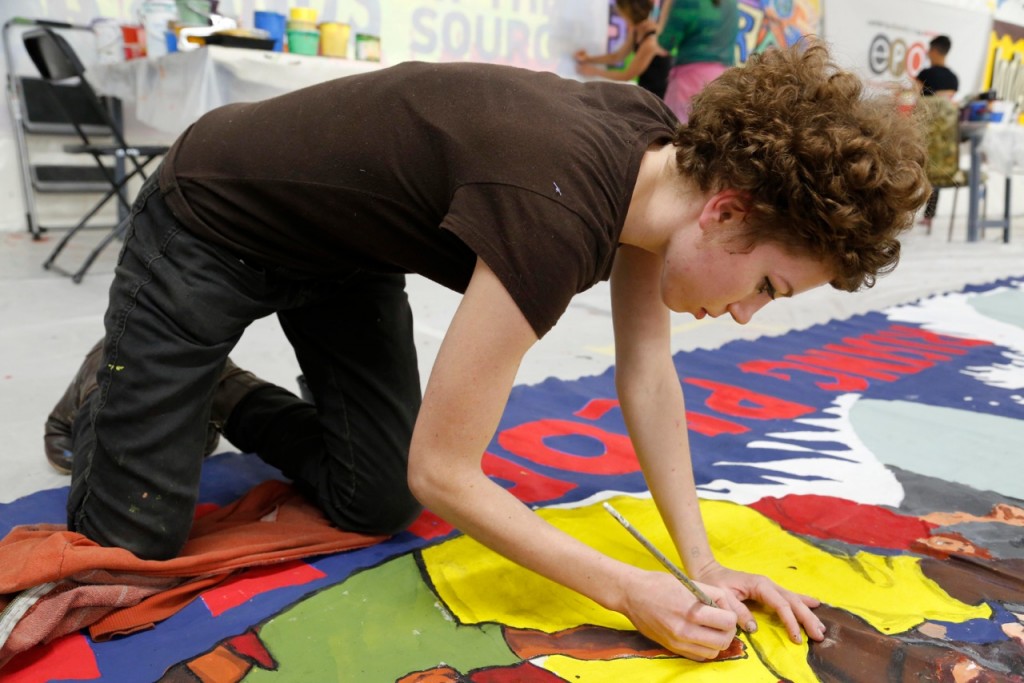 The Mayday Space also has a special meaning for local Bushwick artists. “It is a convergent space for artists, organizers, musicians to talk and discuss,” said Sarah Quinter, an artist who has lived in Bushwick for five years. She is a fan of grass root art and the event gives her a fresh angle to view her neighborhood and to know new artist friends.

For Bushwick residents themselves, the collaboration of the Mayday Space served as an inspiration for the whole community. “Mayday Space is a powerful space for people to gain creative energy around the climate change, also representing the pan-Bushwick,” said Brigette Blood, leader of North West Bushwick Community.

For others, Mayday Space provides a great model for the Bushwick community on how to gather artists together and build relationships with each other in the future. “Many young artists, pioneers move into Bushwick every week and consistently shifting the shape of the neighborhood culturally, racially, and economically,” said Lolo Haha, an activist and a co-coordinator of Reclaim Bushwick Community. “But those individual developers belong to particular classes and lack communication with each other.”

Even though the People’s Climate march may be over, Mayday Space hopes to continue to be a hub of the artist community in Bushwick and beyond.