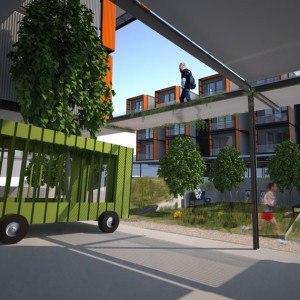 On a brisk Saturday afternoon across Pier 17 the businesses are either filled with the laughter of customers or suffocated by the silence of plaster, boarded doors and debris. Hurricane Sandy struck the restaurants and bars of South Street Seaport hard. Some businesses have bounced back, some have closed their doors permanently. Almost a year later and the work to restoring the Seaport to its former glory is far from being done.

According to the Housing and Urban Development Department, 77 percent of New York’s small businesses were located in coastal regions where Hurricane Sandy struck, such as the Seaport. Hurricane Sandy Businesses along Front Street and South Street faced indoor flooding where water levels ranged from three to as high as six feet in height. The U.S. Small Business Association is apart of the federal Hurricane Sandy Rebuilding Task Force and has approved $2.3 billion in grants to help small businesses. Like many small businesses owners, Barbagallo has not had access to these grants and has had to rely on money out of his own pocket.

“[The city] didn’t really help. We got nothing from insurance. We only got mostly loans from the city, but only a few thousand,” said Barbagallo.

Barbagallo opened Barbalu in 2006. The damage to the building his restaurant is in was so severe that he could not begin rebuilding until the electricity and structure was reconfigured. Finally, on July 1st 2013, Barbagallo began rebuilding. With almost $1 million invested in his restaurant since 2006, Barbagallo has to rebuild for less.

“It’ll still be expensive,” he said.

With expenses piling up it’s difficult for a small business to recover from Hurricane Sandy quickly. Fish Market Restaurant was one of the first bars to reopen at the Seaport. Still, it sustained heavy damages. The back wall is still fresh with plaster. A 6 foot tall water line from flooding stains the chalkboards and wooden cabinets, a grim reminder of a terrible storm. Amanda Toomes, bartender at Fish Market Restaurant, believes one year is not enough time to bounce back.

“People will say ‘it’s been a year.’ You can’t even imagine going into thousands and thousands of debt [to rebuild],” she said. “[Small businesses] aren’t a corporate chain, you can’t pay it easily.”

No one understands a small business struggle to reopen like the businesses themselves. As restaurants and bars rebuild they’ve come to rely on each other for support. Made Fresh Daily Restaurant was one of the lucky ones. While their business was flooded, the water flushed itself out leaving mild damage that took only one month to repair. Molly Corum, who has worked at Made Fresh Daily for over a year, recalls how the restaurant tried to help its neighbors.

“Suiteshi next door had to totally redo their place,” she said. “Up until two weeks ago they were using our kitchen at night for delivery.”

Alongside helping each other, Seaport small businesses have extended support to local residents. Inside Meades Bar there is a chalk line by the stairs, about five feet high. It indicates the water level the small bar endured during Hurricane Sandy. Upon seeing the damage, Lee Holin, owner of Meades Bar since its establishment in 2006, was devastated,

“I’m homeless and in financial ruin,” he said.

Still, despite his own loss Holin kept Meades running for the community. The Friday after Hurricane Sandy hit he reopened the bar and offered the community help.

“We started to serve people 3 days after the storm. We were grilling on the street, serving food and alcohol,” he said. “Most things were destroyed [in the storm]. There was no power, so people couldn’t go to the grocery store.”

Long after the return of grocery stores, Suiteshi amongst other restaurants have dusted themselves off and welcomed customers once again. People are starting to move back to the Seaport. New businesses are cleaning the remains of old ones. Small businesses have lent support to each other and the community after Hurricane Sandy and continue to do so. When asked about what the lasting effects of Hurricane Sandy are for a small business, Holin referred to a statement he gave the press one month after the storm struck.