Ms. Menard at PS 335 is asking for a new computer for her students. Ms. Greene at PS 770 is asking for books, while Ms. Charles at PS 446 is asking for snacks for children who come to school hungry. These Brooklyn teachers are all posting their requests for classroom resources online at DonorsChoose.org, a web-based charity that connects donors to classrooms across the country.

At least one teacher at half the public schools nationwide use DonorsChoose.org. Teachers are turning to the site to fund projects and materials they want and need for their students but that their budgets don’t cover. Some of these requests give a window into a new era of teaching where therapy dogs and iPods enrich the learning environment. Other requests for basic supplies like pencils and paper reveal the inadequacies of public funding to cover even the essentials.

“We just don’t have supplies. There’s no money for books. There’s no money for furniture. You get things from the trash and try to fix it,” says Annika Jones who teaches first and second grade at PS 770, the New American Academy, a three-year-old Brooklyn elementary school in the southeastern corner of Crown Heights, bordering the less-affluent neighborhoods of Brownsville and East Flatbush. The New American Academy is a public school in Community School District 17. Though it’s not a charter, it is a choice school, which means parents elect to send their children there. As part of its alternative teaching model, four instructors co-teach up to 60 students, reasons for which include encouraging community and teamwork but also streamlining administrative costs to do more with minimal public funding.

At the New American Academy and a school in Bushwick where Jones taught previously, she has used DonorsChoose.org to fund a range of projects, from basics like books and a rug to technology like a laptop and a document camera, an item becoming more and more common in elementary classrooms which projects a book at a magnified size for the whole class to read along.

“It’s out of frustration that we are doing these DonorsChoose projects,” said Jen McSorley, a co-teacher of Jones. Though site has classroom projects from every state in the country, McSorley notes that she taught in Florida and in Ohio and had never heard of it until she moved to New York. It was a teacher from a public school in the Bronx dealing firsthand with the scarcity of resources in the classroom who started the online charity, and the site remains popular in the state where it was conceived. More than ten percent of teachers posting projects are from New York.

New York schools have been expected to make due with less in recent years, but that is not something unique to the state. In 35 states, funding for the 2012-2013 academic year is less than it was in 2008—in five of those states around 20 percent less. Cuts, however, disproportionately affect schools that already have less. In wealthier neighborhoods, parent-teacher associations are able to raise thousands of dollars to make up the difference. Where McSorley teaches now, 83 percent of students qualify for free or reduced lunch. When a community has fewer resources, it’s harder for it to fill in the holes that the budget doesn’t cover.

“As parents, we get a list: glue, scissors, construction paper, Kleenex, paper towels, erasers. Those are the things we have to buy for the classroom,” explains Mia Herndon a parent of a second-grade student at the New American Academy. “And not every family has the budget for it.”

“I teach sixth grade but some of my kids are reading at the third grade reading level, so we need more books,” said Sheryann Atkinson at the School of Integrated Learning, a traditional public middle school in District 17. Right now, she is trying to raise nearly $800 on DonorsChoose.org for books for a reading and writing center in her classroom. The correlation between poverty and under-performance means that there is often a greater demand for resources at schools the least prepared to provide them.

In 2007, New York City launched a new way to distribute funds called Fair-Student Funding or Foundation Aid, aimed to give more funds to students with higher needs. Funds would be allocated by pupil instead of by instructor, and would take into account high poverty as well as costs for English learners, special education students, and children performing below standards. Reform followed years of litigation that the Campaign for Fiscal Equality took against the State of New York, on the grounds that students had a constitutional right to a sound basic education. In 2007, New York City Board of Education made a commitment to put $5.5 billion into Fair-Student Funding, but then the recession hit. Since then New York State has decreased its education budget year after year with cuts that were described by parents and the media alike as draconian, historic, and unprecedented. There wasn’t any money to fulfill the progressive commitment.

“You are talking about carving out of an inadequate pie,” explained Ellen Foley, associate director of District Redesign and Leadership at the Annenberg Institute for School Reform, a thinktank that promotes equity in childhood education, especially in urban communities. “When the funds are inadequate, there is no fair way to do it.”

DonorsChoose.org qualifies its classroom fundraisers based on how many students at a school qualify for free lunch programs, and organizes the site to connect users to students in the greatest need. Out of more than 300,000 projects funded through the site, almost 200,000 were at high-poverty schools. The site can show what budget cuts mean for students in a given classroom at a given school, and for many Brooklyn schools, this means requests for basic supplies.

“We definitely have the effect of opening the door to public schools, showing the community what’s going inside them,” says Anna Doherty, senior marketing manager at DonorsChoose.org.

Sixty percent of donors who use the site say it is their first time giving to public education. Some donors are anonymous, giving to a school just because they believe in education; others are friends and family of teachers who post the projects on their Facebook and Twitter accounts. There are also corporations that will double or match the funding for a project. So far this year, the charity has raised $42.8 million dollars for classrooms across the country, and more than $160 million since 2003. Total donations have grown steadily each year, even in spite of the recession.

“I’m very encouraged by the interest communities, businesses, and individuals have to provide support to schools through ties like DonorsChoose.org,” says Foley. She adds that “the troubling thing” is the reason such philanthropy is necessary. Schools are struggling to provide the necessities for teaching under the current budget.

“It’s just wrong,” said Herndon laughing. “I can only laugh because otherwise it’s so disheartening to believe that your child or your community has so little value in the standing of society that it would not provide the basics.” 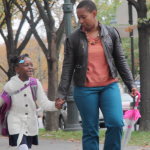 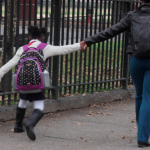 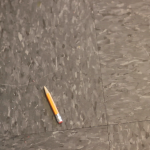 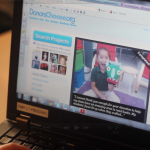 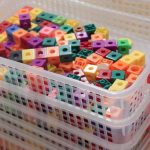 Far left and second from left: Mia Herndon and her daughter Asani walk to school.