Coinbase leads the way for Crypto Alley in Union Square 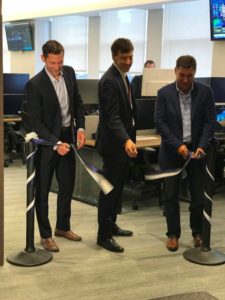 Has the time finally come for large corporations to invest in Bitcoin and  cryptocurrency? That is the agenda of the San Francisco based company Coinbase who recently opened office space in Union Square on Thursday, September 13th. According to LinkedIn, the company has been named the number three most sought after start-up in 2018 with well over 500 employees, including fresh talent straight from Wall Street. The company chose Union Square as its location so it can recruit some of the top talent in the industry.

“They are calling this area ‘Crypto Alley’ because there is a wealth of talent here, there are a lot of customers, clients, hedge funds, and other institutional investors that are close to this area,” said Eric Scro, Vice President of Finance for Coinbase. “It’s a nice epicenter or mid-point between Park Avenue where you have the traditional banks and broker dealers and downtown where you have Wall Street and the New York Stock Exchange.”

The majority of Coinbase clients, including the New York Stock Exchange, are based here in NYC so it’s location in Union Square will make face-to-face conversations more accessible and help to establish the company as a real entity among its crypto-competitors.

Coinbase Vice President and General Manager, Adam White, fundamentally believes that bringing this technology mainstream is going to make the world a better place, posing the question, “What if anyone with a smartphone had access to the same degree of financial services?” The company’s main goal is to create a decentralized network of clients who buy and sell digital currency.

However, there are many investors that still question, “Is it stable? How can I trust it? Is it regulated by the government?” Coinbase attempts to answer these questions by establishing one of its core principles as a platform of tr 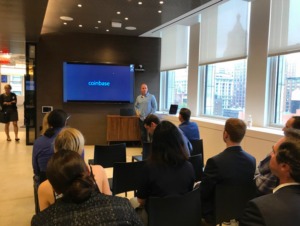 ust. White stressed that the company is not only regulated by the state but also complies with both federal and international standards. He argues the most profound change in the industry came in March 2013 when FinCen announced that virtual currencies are considered to be a Money Business Service, or MBS, and issued registration requirements. By registering as an MBS, Coinbase protects it’s clients from fraud and money laundering and is obligated to comply with all of its record-keeping standards. Even with regulation compliance on all levels, Coinbase is very much a fledgling within this burgeoning industry.

Vital to the functionality of their entire blockchain platform is this idea of a ‘private key.’ The private key is a password that only the client knows and has access to. In the digital world of trading, all transactions have to be established as unique and legitimate. The private key gives the financial transaction this validity by assigning a unique transaction number so purchases can’t be copied, pasted, or duplicated. If it is lost, then the clients access to all of their cryptocurrency remains inaccessible in perpetuity.

Regardless of these impeding problems, Coinbase still has over 20 million customers and has managed to surpass that of Charles Schwab, E-Trade and TD Ameritrade. “New York City started as a beaver trading post and has been trading different forms of currency for hundreds of years,” said James Patchett, President & CEO of the NYC Economic Development Corporation. “This evolved into the New York Stock Exchange and Coinbase is the next evolution of that.”

Emily DeLuca is a multimedia journalist whose talents extend to a variety of storytelling mediums that include print, photo, and video journalism. She is passionate about hard news and positive human interest stories.
View all posts by Emily Deluca →