“We will never be defeated!” The crowd chanted as they walked through the rain. Their posters were bleeding and they clothes were soaked, but their cause was bigger than the rain. The Rally Against Trump brought over 7,000 New Yorkers to their feet. They marched 20 blocks, from Union Square to Trump Towers. They confronted their aggressor.

“It’s fitting, the weather reflects the mood,” said NYU graduate student Ankita Sud. Many others felt the same. Twitter hashtag #godiscrying was trending for an hour.

The protest began in Union Square where the host, Socialist Alternatives, addressed the crowd.

“I am a black-Puerto Rican trans gendered women,” one member shouted into the megaphone, “and we welcome all groups to shout out who they represent!”

A series of groups, including Black Lives Matter and the Green Party, all made their presence known. As the protest went on, more chants arose from the crowd, including “My body, my choice,” and “P***y grabs back.”

The protest came a day after Donald Trump won the election over Secretary of State Hillary Clinton and was one of many continuing protests across the country in the days since. 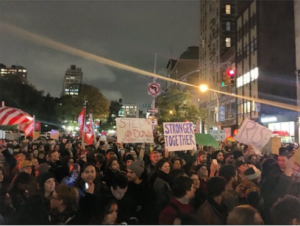 “I fear where all this hate will go after it’s all over,” said Villanova University Rhetoric Professor Dr. Billie Jean Murray, “people won’t stop thinking those things once they’ve been said.”

Along the route of the protest, most New Yorkers were supportive of the march. Cars were honking along with the chants, taxi drivers got out to clap, and tourists stuck on buses cheered them along. However, not all was great.

A man walking against the route had stopped to scream in a women’s face that she lost, and should “shut the f**k up,” because Trump was in charge. She began to cry.

Another man in Time Square had stopped walking to stick his middle finger in a female protestors face and told her “It’s Trump’s time now.”

One of the bigger fears noted at the rally was hate crimes and killings of minorities. As of 2012, the FBI reported that 50 of 1 million black people are victims of hate crimes. There is a fear this number will go up. A number of hate crimes have already been reported around the country, including New York University. A #Trump sign was found written on the door of the Muslim Student Association. High schools across the Trump have students walking with Trump signs, shouting “white power.”

“This is my country, our country, no matter what the color of you skin is,” explained one young Trump protestor. “This country was built on immigrants.” She held a sign that read “Not My President.”

As they marched down 5th Ave, many held hands, linked arms, and cried. The atmosphere was not filled with hate. It was a time of love, where a community broken and saddened came together to mourn. In a time of fear, it is necessary to scream into the void. Even if the man you are screaming at is not listening.