The Tech Giant and their Reign on Society 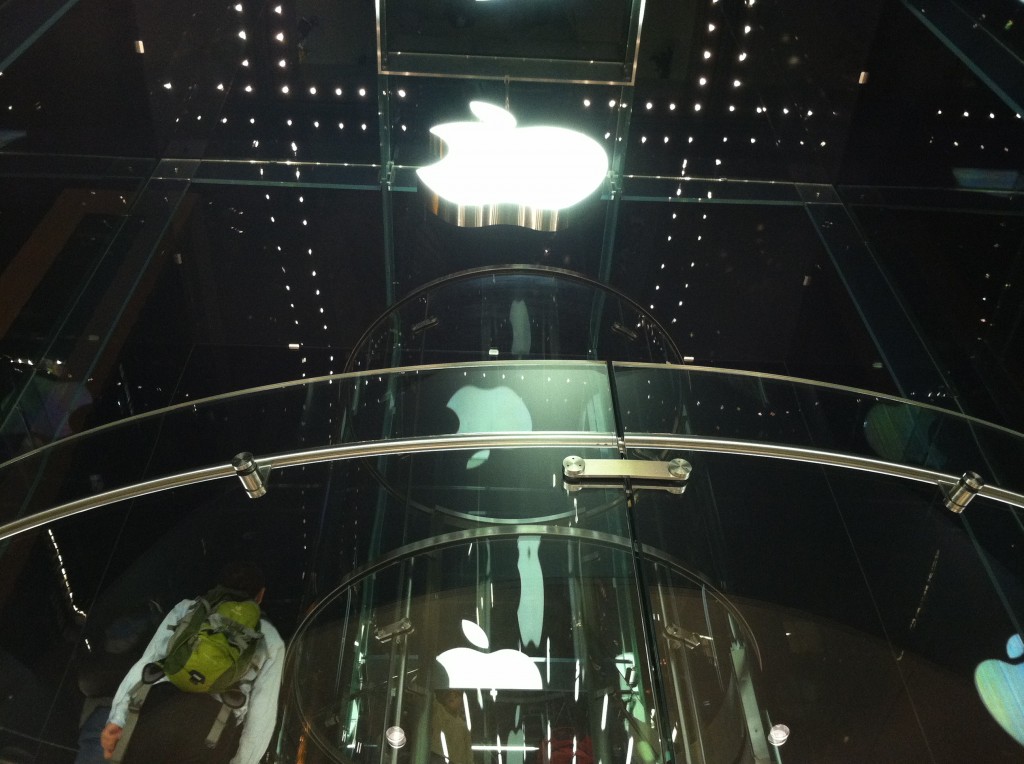 NEW YORK – As trendy people flock around cobble stone roads for a late night drink in the Meatpacking district, patrons will find a long line of people casually tucked into their sleeping bags outside of the West 14th street Apple store. Three weeks after the new 5c and 5s iPhone models’ initial launch, demand is not near the dwindling period for the late-coming shoppers. A line of about 20-30 customers can be seen camping out on the store’s front on a daily basis. A store rep mentions that a crowd of people still routinely line up overnight in order to be the first to score the sporadic shipments the store receives.

Google search ‘Apple cult’ and you’ll find numbers of articles proclaiming their knowledge about the cult following behind the giant tech company, dating back from March 2007 when their first iPhone was set to launch that summer. The innovation solidified Steve Jobs’ famously over-quoted “Think Different” mantra that started it all.  Flash forward six “game changing” years later, and we’ve had a major shift in technology where Apple is leading the way in how our relationship with technology has evolved and enthusiasts are no longer seen as the cult but the mainstream.

Apple’s reigning tenure in the market is more than just a reflection of a cult or a religion, it is beyond an obsessive way of life. These are not merely what have come to be known as techcessories, these are like “an extension of our limbs,” says iPhone user Katie Rivara. “I’m pretty attached… It’s kind of like a default,” she explains as she’s using her phone as a chin rest, “I’ll wake up, I’ll roll over, [grab my phone] and I’ll be learning like 5,000 things on the web before I even get up.”

And while many Apple critics including fans, skeptics, and the media have expressed a dying faith in their beloved gadget producer, the dedication to the latest launch had millions of viewers tuning in to their most recent keynote, an event that used to be something that only devoted followers would watch. And leading up to the actual sale event, Fifth Avenue Apple store greeter Nina Manso notes that people started lining up two weeks prior to “Launch Day.” This is nothing new of course, with past iPhone and iPad launches warranting the same fanatical response from dedicated “early adopters,” but Manso mentions that she was surprised that the first people in line were “genuinely waiting to get their phone,” and not selling their spots in line. “Because people do that,” she explains.

The response to the famed monochromatically styled company is a worldwide phenomenon; “I’m using Apple for ten years now. So everything is focused on Apple at home,” explains German tourist Benjamin Ress as he sat outside the Fifth Avenue Apple store (using their WiFi he admitted). The evolution of the devotion can be noted in the younger generations. “I see that my [niece], she is 14 years old, and she’s been owning an iPhone for two years now… I don’t think that she can imagine living without it… We had a Gameboy…”

Apple’s innovative lead has started the trend that has come to become a part of its’ users second nature habits. “Start With Why” author Simon Sinek coded the simple way that companies like Apple “think different”. In his 2009 presentation at Ted Talks, Sinek describes the “golden circle” graph. To outline his argument, Sinek focuses on Apple’s thought process. He explains that they ask themselves why they do what they do. “The goal is not just to sell people who need what you have, the goal is to sell to people who believe what you believe.” People are loyal to why you do something because they want to be a part of what you believe, he clarifies.

To the critics and straggling non-believers, Apple is here to stay. “They revolutionized why we need their products,” says former Apple employee Juan Gonzalez. “We now all ‘think different.’”